It's our 75th Anniversary!

In celebration of our 75th Anniversary for the USBGA, we will be honoring many of the great golfers, coaches, volunteers and stories from our past.

Read this letter from the PGA! 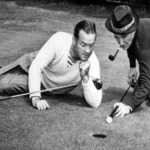 Bing Crosby gives Bob Hope a golf lesson.  The image below was taken early in the year but wasn’t published until Dec. 8, 1946.  It appeared in a Los Angeles Times Sports section story promoting Bob Hope and Bing Crosby’s appearance at the National Blind Golf Tournament held at Inglewood Country Club.  Hope and Crosby lent their presence to countless charity golf events. For one such tournament, Times staff writer Charles Curtis dubbed the pair, who appeared in more than a dozen movies together, as “the tee-time twins who always show up when the call of charity sounds for a golf exhibition.”

Charley Boswell from Birmingham, Alabama lettered in 3 sports in high school, earned a football scholarship to the University of Alabama, eventually winning a place with baseball’s Atlanta Crackers in the minor league in 1941. That same year he was drafted into the U.S. Army, who sent him to Officer Candidate School whe

re he commanded the Headquarters Company of the Third Battalion, 335th Infantry Regiment, 84th Infantry Division in Germany during World War II. In a battle near Lindern, Charley pulled a wounded fellow soldier from a burning Sherman tank. The tank exploded leaving Charley permanently blinded.
As part of his rehabilitation at Valley Forge Hospital in Philadelphia, he learned how to play golf with the help of Cpl. Kenny Gleason and as they say, “the rest is history”. Charley won his first National Blind Golf Championship at Northland Country Club in Duluth, Minnesota which was the second USBGA National Tournament in 1947. 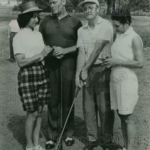 nt followed by Joe Lazaro and Charley Boswell who together guided the USBGA from 1956 through 1976.
In Bob’s eagerness to spread the word on the joy of playing golf with other blind golfers, he founded the Mid-Atlantic Blind Golf Association.
The link below directs you to the Tufts Digital Library audio archive where Bob Allman was interviewed by Edward R Murrow titled “A ball to roll around”, click to play the audio.
http://hdl.handle.net/10427/76030
Photo is of Charley Boswell and Bob Allman with two fans at the National Blind Golf Tournament in 1960, courtesy of Historic

PATTEMORE’S 201 WINS US BLIND GOLF CHAMPIONSHIP.
Canadian Earns Honors by Stroke–Lazaro Is 2nd in the1963 US Blind Golf Championship at Westchester Hills.
Claude Pattemore, of Hamilton, Ontario, won the U.S. Blind Golfers Championship, at Westchester Hills GC, White Plains, N.Y., with a 97-104. Pattemore beat the defending champion Joe Lazaro, of Waltham, Mass., who had 98-104. Lazaro took a 10 on the15th hole of the second round when he hit his tee shot out of bounds. Charley Boswell was third with 101-102. Pattemore, a 37-year-old restaurant cashier, won the International Blind Golf tournament prior to winning at Westchester Hills.
Claude Pattemore was born in Athens, Ontario in 1927. In 1948, a construction explosion at work blinded and nearly killed the 21-year-old. He underwent rehabilitation in Toronto and Hamilton before working first for the Canadian National Institute for the Blind, then running cafeterias for a number of local Hamilton plants. Three years after his injury, Pattemore took up golf and immediately excelled at the game.
He won the Canadian Blind Golfers Championship 12 times between 1952 and 1972. In 1963 Claude achieved his personal best of 78, a score rarely achieved even by sighted golfers. In 1996, Claude was inducted into the Canadian Golf Hall of Fame and on October 16, 2000, Pattemore was inducted into the Ontario Golf Association’s Hall of Fame.

In the RCGA’s alphabetical listing of its Hall of Famers, Claude Pattemore is right between Bob Panasik and Sandra Post, an incredible accomplishment from someone who only took up golf at Chedoke Golf Course after losing his eyesight in the industrial accident.
Claude passed away in April 2004. Those of us who knew him will not forget him, and those of us who didn’t should take inspiration from his story. Thank you Claude for all you have done to promote blind golf.

The year was 1962. The Blind Golf Nationals were held at the Druid Hills Golf Club in Atlanta Georgia (read more) 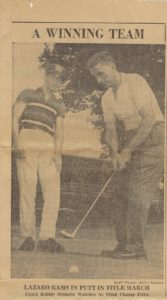 As had been for the past seven years, Joe Lazaro and Charlie Boswell were in spirited competition to place first in the tournament. But Joe had a secret weapon this year, his new coach, Bob Jennette and with Bob’s guidance, Joe held his lead to win his first Blind Golf Nationals after 7 years of placing second.
Speaking of great coaches, Bob Jennette stepped up to the plate (or tee box) once again to coach one of our new USBGA members Keith Gile in the 2019 National tournament in Las Vegas. Thank you Bob for your support of blind golf!! 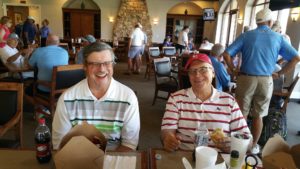