If you would like to turn a blind person with a set of golf clubs into a blind golfer, just add a coach. That’s right, the “coach”, sometimes referred to as a guide is the other half of the  ultimate team sport called blind and vision impaired golf. Together they team to master the shots that bring gratification and enjoyment from the game of golf.

Who can become a coach and what kind of training is necessary? One coach responds to the question by saying, “Anyone with a driver’s license can become a coach so that the team can get to a golf facility.” Some knowledge of golf is helpful but not imperative. If you are willing to learn to gauge distances, place a club head behind a ball, and encourage a blind golfer to develop his abilities, then you can be the key to a blind golfer’s game.

Golfers who are coaches are often heard commenting that their own game benefits from coaching a blind golfer. Because coaches want to insure that a good shot is produced with a good swing they pay close attention to correct alignment, solid setups over the ball and realistic course management. Coaches learn to “take advantage of the golfer’s disadvantage!” That’s right, there is no ne

ed to know every time about a difficult tree to negotiate or water and sand hazards to carry.

Why are some blind golfer’s great putters? Because they know exactly how far a putt is by stepping it off with their coach guiding them to the pin while at the same time gauging the slope. Then all that is left is a good read of the green from the coach, a straight stroke from the blind golfer who has the benefit of no visual distractions and the team sinks the putt

The role of a coach can be filled by anyone; from a PGA professional golfer to a person who does not even play the game. The level of assistance provided by a coach may vary by the sight loss of the golfer. The one constant, however, is the need for more coaches. By acting as the eyes for someone who is blind or vision impaired the coach gives that person an opportunity to participate and enjoy the game while he, the coach, receives the satisfaction of giving and making a real difference.

Me Coach??
I Don’t Even Play Golf!

This article is probably going to be a little different than the average coach’s article. You see, I know how hard it is to find that special coach for a blind golfer. When my son went off to college and could no longer coach my husband I felt that I should give it a try even though I have never, ever, even picked up a club. For years I watched these men and women coach the blind around the golf course and thought “Well, maybe I can”. But, I had to find a way to be able to relate to it, not being a golfer. In watching my kids play with their Nintendo video games I came up with the idea that Bob would be my “Nintendo Golfer.” The object was to get his ball from the tee to the green in only a few shots.

Bob set up a few lessons with his golf pro and I watched. I memorized how he put the club down, where his shoulders and feet were supposed to be in relation to the ball, and where the ball should be in his stance. I have a good judge of distance so Bob could tell me what club he needed, if I knew the distance. Now as long as I set the 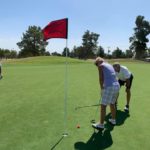 club down right; his shoulders, hips and feet were both going in the same direction as the club face; the ball was in the correct place in his stance and he swung easy, “my” ball would go where I directed it. And if not, I would tell him it was his fault!

The putting is actually an interesting facet of the game for a blind golfer and his coach. I will walk Bob from the ball to the flag and we count the distance. Then as we walk back to the ball he pays close attention to the way the ground is sloping and how much. We can then calculate the break from there. It is all guesswork, but you can get pretty accurate after you have done it quite a bit and trust your judgment. To me, the he roll of a coach can be just as rewarding as playing the game itself.  Using Bob as my “Nintendo Character” puts me in the driver’s seat and allows us to play the game as a team. Sure, at times it is extremely frustrating; but, the rewards far surpass the hard times, and I would highly recommend the challenge to anyone, any age, golfer, or not.

Dennis Cone, the Founder of the Caddie HQ-the Caddie Foundation, honored Kevin J. Sullivan by presenting him with the Buckey Walters Award at a special ceremony held at the Guiding Eyes for the Blind Classic, on Monday June 25, 2007.

With this Award, Kevin became the first Caddie/coach to enter into the special section of the Professional Caddie Hall of fame.

The Buckey Walters Award was established to recognize Coaches of the Challenged golfer, who enjoy the game, while managing special needs of all kinds. Sullivan has coached Bill McMahon in numerous Blind Golf competitions, since 1991.

Other USBGA coaches to receive this honor are Gerry Berouse and Joseph McCourt.

Three USBGA coaches have won the Buckey Walters award:  Kevin Sullivan, Gerry Berouse and Joe McCourt.   There are many impressive people also won this award and it is still going strong.   Visit the website of the Western Golf Association Caddie Hall of Fame.  Make sure you visit the list of inductees to the Caddie Hall of Fame here!

David Mouton is Recognized for his Coaching Skills

The Ken Venturi Coach of the Year Award is named in honor of the legendary PGA champion and World Golf Hall of Famer.  Ken deeply appreciated the relationship between a coach and a blind golfer, believing a coach must have a high level of expertise in the game, exemplary sportsmanship, and spirited compassion.

The criteria for this distinguished honor include participation in at least five Corcoran Cup tournaments, outstanding sportsmanship and good judgment, a demonstrated helpfulness and respect of all players, as well as a willingness to advocate for the US Blind Golf Association and Guiding Eyes for the Blind.

This year we are pleased to present the Coach of the Year Award to David Mouton, coach for blind golfer, John Casolo.

When the USBGA National Championship came to San Antonio in 2009, John was scheduled to play but had no traveling coach. David’s weekly golf partner Harry Hester, a B3 player in Austin, asked David if he would like to coach for John and he agreed. This was the beginning of their historic journey; they are now the best of friends and have played together at every possible tournament since then.

John shares, “It makes me extremely happy to know that David will be receiving the coach of the year award.  For the last five years, we have averaged at least four tournaments each year and we always have a great time – no matter how poorly I play.  David is not only a super coach, but he has become a wonderful friend.  I am truly blessed to have his presence in my life.”

On behalf of Guiding Eyes for the Blind and the Golf Classic Committee, we congratulate David on this prestigious honor.