Hosted by Guiding Eyes for the Blind

Thank you to all the USBGA members participating in the Guiding Eyes virtual golf tournament!

Due to concerns and limitations of traveling resulting from the COVID crisis, th 2021  Guiding Eyes Pat Browne Jr Memorial tournament was held virtually.  Golfers from all over the USA participated in this fun event.  We thank your friends at the Guiding Eyes for the Blind for hosting yet another spectacular event!

Mt. Kisco, NY; 10 of the best blind and vision impaired golfers gathered at Mt. Kisco Country Club on June 10 for the 41st Guiding Eyes For the Blind Golf Classic.  Beginning this year, the tournament known as “The Masters” of blind golf will be renamed the Pat W. Browne, Jr. Memorial Golf Tournament.  Pat Browne, Jr. won this tournament 21 times in his career, so it seems fitting that his name will forever be associated with the tournament. 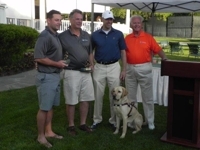 Impaired Trophy which went to the player with the highest number of net points in our modified Stableford scoring system.  Scott Wilson, coached by Vicki Wilson won the trophy with +35.5, less than 3 points better than Ty Thompson and coach Doug Kaylor.

The blind golfers continued to compete for the Corcoran Cup.  Chad Nesmith, coached by Andy Church, set a tournament scoring record with a total of 72 Stableford points—a feat that included a birdie and an eagle in his round.  Mario Tobia and coach Frank Hesson won the Cribari Trophy for the second most points with 47—a total that would win in most years.  The McFarland Trophy for the golfer with the highest number of net points went to Ron Derry and coach Jane Ahearn with +28.  Sheila Drummond and coach Keith Drummond won the Spoonster Trophy for the most improved over 2017 with +3.  Congratulations to all the winners!

On Monday June 11, the USBGA members played several holes with a number of sponsor groups in the Guiding Eyes Classic Scramble.  This gives the USBGA members a chance to show their skills and to thank the sponsors for supporting Guiding Eyes For the Blind, making the Pat W. Browne, Jr. Memorial Tournament possible.

It is always a terrific event.  All USBGA members should aspire to compete in this tournament at least once in their blind golf career.

Congratulations to the following winners!

Eleven USBGA members traveled to Mt. Kisco, NY June 11 for the 40th playing of the Corcoran Cup at the Guiding Eyes Golf Classic.  A summer heat wave greeted the golfers as temperatures hovered in the low 90’s—it was cooler at my house in Florida!

As always, the Mt. Kisco Country Club was in superb condition with slick greens, smooth fairways and deep rough—good thing John Casolo’s coach, David Mouton, is tall or we could have lost John in the rough a couple of times.  The golf was

Ron Derry won the McFarland Trophy for Most Points Over Target, plus 19.  Dick Pomo and John Casolo tied for the Most Improved Award (Spoonster Trophy).

On Monday the blind golfers enjoyed the Classic Scramble, playing a few holes with the sponsors and supporters of Guiding Eyes For the Blind.  As part of the 40th anniversary celebration, Pat Browne III and his mother Sherry were in attendance.  Pat gave a short speech on his father’s relationship with Guiding Eyes and how much the tournament always meant to him.  Dick Ryan, one of the founders of the Golf Classic was in attendance and shared a few memories.  He closed his speech with a special announcement.  He announced that beginning in 2018, the Guiding Eyes Golf Classic will be renamed the Pat W. Browne, Jr. Memorial Golf Tournament and as you can imagine, it drew a large round of approving applause from the audience.

Here’s to another 40 years!


The 39th Guiding Eyes Classic was held at Mt. Kisco  Country Club in Mt. Kisco, NY, on June 12, 2016 .  This event is a fund raiser for Guiding Eyes for the Blind, a guide dog training school in Yorktown Heights, New York.

The weather was  pleasant , breezy and no rain on Sunday.  The Monday scramble was well attended even though it was chilly and windy. All golfers had  a great time.

David Santucci received the Ken Venturi Coach of the year Award. David is the Coach of Ted Fass.

The weather was great, warm and sunshine on Sunday.
The Monday scramble was well attended even though it was raining early, but it cleared up and became a nice day. All golfers had fun.

Mark Batty received the Ken Venturi Coach of the year Award. Mark is the Coach of George Pilz.

Tonya, Guide dog, of Dick Pomo received an Award from the Canine company 2015Dog of the Year. This is a new award given for the first time to Tonya.

Read  more about the tournament on the GEC Website

The winner of the Corcoran Cup is the competitor who scores the highest number of points. This years winner is Ron Derry coached by Phillip Hankins.

The Cribari Trophy goes to the competitor with the next highest number of points. The winner is Tony Schiros coached by James Kaiser.

Each USBGA golfer will have a USBGA handicap this year. Based on that handicap, each golfer will  be assigned a target number of points for the competition. The McFarland Trophy will be awarded to the competitor who exceeds their point target by the most points. The winner is Sheila Drummond coached by Keith Drummond.

The Spoonster Award for the Most Improved Player will be awarded to the team who showed the most improvement from last year to this year. The winner is Mike Mercado coached by Bob Clingerman.

Read  more about the tournament on the GEC Website


Mario Tobia, a former discus thrower athlete in high school and college, flew by the field in a strong finish at this year’s Guiding Eyes Corcoran Cup, the Masters of Blind Golf. Mario and his coach, son Matthew, 28, closed out the competition with an incredibly strong bogie, bogie and par on their last three holes played at Mount Kisco CC, Mount Kisco, New York.

“We got off to a rugged start, scoring only 12 stableford points on the front nine, which pretty much put us out of the running for a win. But I found my swing and began hitting fairways on the back nine.” said Mario in a recap ten days after tournament play.

This was the 36th consecutive year in which Guiding Eyes for the Blind brings in the top ranked 14 USBGA totally blind golfers and their coaches to play the Corcoran Cup, typically played on the second Sunday in June. Golfers and their coaches then stay over for the Guiding Eyes Monday golf fundraiser and Monday evening banquet. The Guiding Eyes Monday event is one of their largest annual fundraisers, a corporate golf “scramble” that fills not just one golf course but two. The first is Mount Kisco CC in Mount Kisco, NY. The other is Fairview Country Club just across the state line in nearby Connecticut.

According to Guiding Eyes president Bill Badger, “It takes approximately $45,000 to breed, raise, train and match one guide to a blind or visually impaired handler. The funds raised through the Guiding Eyes Golf Classic are hugely important to the school and the USBGA is an essential partner in making this happen. By playing golf with corporate sponsors and interacting with our dinner guests, the USBGA helps to keep our mission in the forefront throughout the event.”

David Meador and coach Everett Davis were winners of the Cribari Trophy, awarded to the competitor with the second highest number of points. Jim Baker and coach Kyle Seeley took home the McFarland Trophy for most exceeding their point target based on their USGA handicap. Ron Derry and Coach Brian Larson won the Spoonster Award as the team showing the most improvement from the previous year.
Obviously, the USBGA is itself a winner for long helping such a great cause. Congratulations one and all!