The USBGA is proud to host the 2022 Vision Cup at the beautiful TPC Sawgrass Stadium course.  This international competition is the same format as the Ryder Cup.   The top players from each sight category from the US and Canada  will compete against the top players from around the world.  The event will be in September 18-23, 2022.

More information will be posted when it is received.

History of the Vision Cup

Every two years the finest golfers from all around the world who are blind or visually impaired meet to battle it out for the Vision Cup, their equivalent of the Ryder Cup only played between mixed teams from North America against the Rest of the World. A number have single digit handicaps and each and every one of them is an inspiration to others about how to meet adversity head on and triumph.

Blind golf has been going for a lot longer than most would imagine, in fact since shortly after 1924 when a tyre exploded in Clint Russell’s face in Duluth, Minnesota. He carried on playing, with help from his friends, and was noted in Ripley’s ‘Believe It or Not’ museum as the first ever blind golfer.

He, like every other blind golfer, had to rely on friends and today many say that having to ask for help is almost as tough as adjusting to losing their sight.

However, many golfing friends, partners or spouses readily agree to act not just as caddies but guides around the golf course.

In 1998 the International Blind Golf Association (IBGA) was created to devise, promote and fund international events backed by Japanese philanthropist Dr. Haruhisa Handa who had previously founded the blind golfers association in Japan after being inspired by playing with a blind golfer at Western Australia. 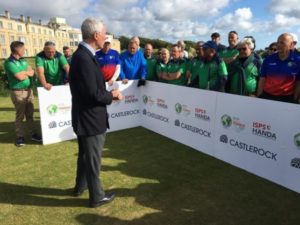 It was Handa and his colleagues who came up with the idea of a world championship. With the IBGA getting to more than 600 players it seemed sensible to create blind golf’s bi-annual version of the Ryder or Walker Cup only having women in the teams too. The Vision Cup started out life in 2013 as the Resmeyer Cup, and came into being because of the determination of three IBGA board members and the financial backing of Dr. Handa.

Since 2013 matches have been played at Green Island, Georgia, Villa d’Este, in Lombardy, and this year coincided with the British Amateur Championship in Dublin, so while the top amateurs went head to head on Portmarnock, at nearby Portmarnock Links the world’s 24 best blind golfers were locked in combat for three days at the Bernhard Langer-designed property.

Blind golf tournaments are divided into three sections: B1 players are totally blind while B2 and B3 sections have varying degrees of impairment, although even B3 golfers only have 10% vision, the ball is a blur and people only identifiable by a hazy outline when standing nearby. No B3 golfer can see the flight of their ball or where it lands.

So it was that the golfers and their guides arrived at the Portmarnock Hotel Links from England, Scotland, the Republic of Ireland, Italy, South Africa, Israel, USA and Canada.

There is a party atmosphere at the Vision Cup with each golfer perfectly understanding what massive hurdles all the other golfers have had to overcome. There were people at Portmarnock who had gone blind through wartime guerilla attacks, while another, Paul McCormack (pictured below right), lost his sight looking for the dead on behalf of New York Police Department among the carcinogenic fumes of ground zero at the World Trade Centre after 9/11. 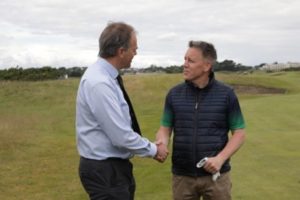 All of them have faced trauma and some have been so down they considered ending it all until a friend suggested that golf might be the answer in getting them out of the house and then driven them.

Some, like Billy McAllister of the Rest of the World and Ty Thompson from the North American side, learned to play golf after having gone blind. When beginners complain about how tough golf is to start with imagine trying to learn the game with your eyes closed.

There is an extraordinary tight bond between the guides and the golfers as guides must discern what the B2 and B3 can see and then help line them up to get to their target. B1 guides have a tougher job because they must walk their players to the hole so that their players can get an idea of the contours.

Billy played billiards when he could see and knows what a 12-foot distance feels like so his guide, Andy Dutton, calls his putts in billiard table lengths.

What would amaze most golfers who have never witnessed a blind golf tournament is the phenomenal standard of play. It certainly impressed Royal & Ancient club captain Chris Hilton, who came to meet the teams and watch them all drive off on the last day’s singles matches.

In the opening match out with the Rest of the World needing five points to win, John Eakin, a former club captain of Royal Ashdown Forest in East Sussex, was playing off nine against the big-hitting young Canadian from Calgary, Kiefer Jones (below), off six and who routinely crunches his driver past the 300-yard mark. 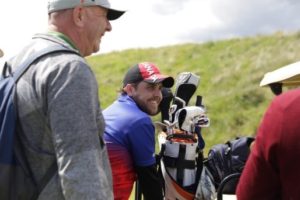 Their game was a cracker, all square coming down 18, with Eakin receiving the last of his three shots. A three putt from 35 feet on the 361-yard par 4 from Jones was sufficient to see Eakin take the point with Jones having been 4-up and level par after seven holes.

The Rest of the World team got off to a flier winning the first five singles matches to retain their hold on the trophy by 15.5 points to 8.5. That evening was spent in celebration for everyone involved because if anyone could ever say that there were no losers at an event then Portmarnock Links with these inspirational players at the Vision Cup was most certainly the place to be.